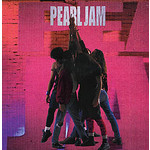 Originally released in 1991, TEN is the seminal album release which introduced the world to Pearl Jam.

The album produced three hit singles: "Alive", "Even Flow", and "Jeremy". While Pearl Jam was accused of jumping on the grunge bandwagon at the time-despite the fact that Ten had been both recorded and released before Nirvana's Nevermind-Ten was instrumental in popularising alternative rock in the mainstream.

This version is in its remastered original mix with original artwork, not the new mix that was done for its Anniversary edition in 2009.