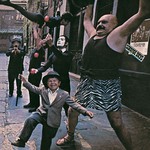 The Doors had one of the most extraordinary debut years in music history in 1967, releasing a string of hit singles and two platinum albums, beginning with the band's self-titled debut, followed by Strange Days. The latter peaked at #3 on the Billboard album chart and featured classics like 'Love Me Two Times', 'When The Music's Over', and the title track 'Strange Days'.

Strange Days (50th Anniversary Edition) was produced by the album's original engineer Bruce Botnick. It includes the original stereo mix of the album on CD for the first time in a decade, with sound that's been remastered for the first time in 30 years. The second disc features the album's original mono mix, which has been remastered for this set and is making its CD debut. Accompanying the set are liner notes by music journalist David Fricke, as well as a selection of rare and previously unseen photographs.