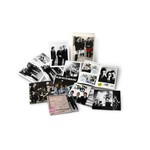 A 40th anniversary five-disc box set, celebrating the Jam's debut year when they released two albums and three hit singles. Features 'In The City' & 'This Is The Modern World' - original albums re-mastered as well as unreleased demos and live recordings.

Disc 1: 'In The City'
Debut LP from May 1977. Using albums by The Who and Dr Feelgood and the live thrill of the Sex Pistols as a template the Jam created their exhilarating debut album which includes hit single In The City, live favourite (and suggested single) Art School and Paul Weller's most ambitious early song - Away From The Numbers.

Disc 2: 'Demos'
Includes 11 demos made for the first album - 6 of which are previously unreleased.

Disc 3: 'This Is The Modern World'
The follow-up album, released a few months after debut in late 1977, with iconic Gered Mankowitz cover shot. Includes the rousing hit single The Modern World and some of Weller's early introspective gems - Life From A Window and I Need You (For Someone), as well as The Combine, a track that pointed markedly towards the next album All Mod Cons.

•Five LP-style CD wallets with printed inner bags - 'In The City' features the US version of the LP inner sleeve, also using a Martyn Goddard out-take photo. 'This Is The Modern World' features an alternative Gered Mankowitz cover image.