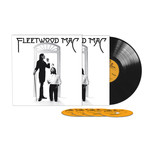 The band's campaign to reissue its classic albums continues with Fleetwood Mac: Deluxe Edition. This collection includes the original album with newly remastered audio on CD and LP; rare and unreleased studio and live recordings; plus a DVD with 5.1 Surround Sound and high-resolution mixes of the original album.