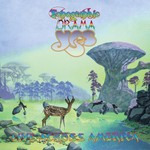 Among the world's most influential, ground-breaking, and respected progressive rock bands, Yes was founded in 1968. The Grammy-Award® winning recording artists have sold more than 50 million records in a career that has so far spanned six decades.

Machine Messiah
White Car
Does It Really Happen? Into The Lens
Run Through The Light
Tempus Fugit
And You And I
Heart Of The Sunrise The Revealing Science Of God / 02. Leaves Of Green
Ritual Roundabout
Starship Trooper