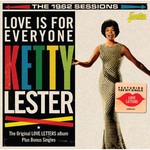 Ketty Lester
Love Is For Everyone

Ketty Lester's 1962 version of 'Love Letters', a song originally composed by Victor Young and Edward Heyman for the motion picture of the same name which starred Jennifer Jones, forever linked her to that exclusive club, 'the one-hit wonder".

Here Jasmine have put together a charming collection which opens of course with the album 'Love Letters' which appears in its entirety along with a selection of bonus singles which include 'But Not For Me', 'You Can't Fool A Fool' and 'This Land is Your Land' which were all minor hits for her.

These lovingly remastered tracks prove that along with being a successful actress she was also a superb song stylist and hopefully this collection of 20 tracks goes someway to lift the 'one hit-wonder' tag.