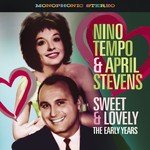 Long before they hit with the million-selling 'Deep Purple', in 1963, brother/sister team NINO TEMPO & APRIL STEVENS had each pursued solo careers and also recorded as a duo, with varying levels of success.

This compilation presents a 'Very Best Of' those early years, ranging from April's long forgotten/oft controversial early solo hits, to their first recordings together.

Juxtaposed alongside these are the best of Nino's early solo 45s, like 'Tempo's Tempo' (from The Girl Can't Help It), 'Fifteen Girl Friends', 'Blue Eyed Baby' (on which he was billed as Tony Shepperd) and 'Jack The Ripper'.

Also, their earliest duets, like 'High School Sweetheart', 'A Letter On A Train'/'Big John' (on which they were billed as Carol & Anthony) and their first two hits, 'Sweet And Lovely' and 'Paradise'.

Many of these sides are obscure, collectors' rarities, and unavailable elsewhere on CD.