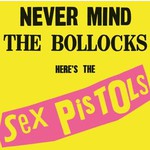 It's almost 40 years to the date since Never Mind The Bollocks was released and to mark this significant anniversary we're proud to revisit the out-of-print super deluxe edition of the album originally issued in 2012. Released in limited quantities at the time its widely considered the definitive version. Unlike its 12" by 12" predecessor this new, smaller sized edition still boasts 3CDs which include the original studio album with 1977 B-sides, a disc of outtakes and a disc of live. Plus, a DVD featuring 1977 footage of the band playing live from the boat party held on the River Thames, London, the Winter Gardens, Penzance in Cornwall and the Happy House, Stockholm, Sweden. To accompany this there is a 48-page hardback book with narrative from Pat Gilbert which includes rare photos from John Tiberi, Bob Gruen, Dave Wainwright and Barry Plummer.