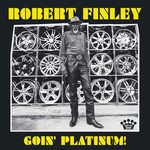 Fortunately for us, here in 2017 Mr. Finley has all three in spades.

The singer lives in the tiny, forgotten town of Bernice, Louisiana, right near the Arkansas line, but in his younger days his music took him all over the world. Joining the Army as a teenager, Finley was sent to Europe as a helicopter technician but found more appealing work as the leader of the Army band, and toured the continent many times over on guitar and vocals.

Following his rambling military service, he learned the trade of carpentry and settled back home in the States. He leaned on his gospel and blues songs for a hobby rather than career, and mostly confined his artistry to the streets of the South.

This latest album, Goin' Platinum, was produced by Dan Auerbach of Black Key's fame and released on his Easy Eye Sound label.

The Black Keys' Dan Auerbach calls Robert Finley "the greatest living soul singer". Thus, he has signed the 63-year-old to his label, produced him, written the songs (along with the likes of Nick Lowe and John Prine) and paired him with stellar musicians from Elvis sidemen to legendary "guitar man" Duane Eddy.

The results are decidedly retro-modern - that bit too well produced to have been authentically blaring out of a roadside bar in the 1960s - but are steeped in blues and soul and a lot of fun. Finley wraps his gravel chops around playful, mildly lewd, Tom Jones-type stompers (Get It While You Can), snaking swamp blues (Three Jumpers), breezy pop (If You Forget My Love) and aching, falsetto-driven, redemptive soul (standout closer Holy Wine). In truth, it's all too well-worn and traditional to have much chance of "goin' platinum", but the big-hearted Louisiana man certainly deserves his chance. (Dave Simpson, The Guardian)