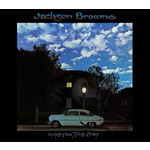 180g vinyl reissue of Browne's classic 1974 album Late For The Sky.
Co-produced by Browne with Al Schmitt, who was also busy working on tracks for Neil Young's On The Beach album that year, Late For The Sky has long been held up as one of the strongest albums in Browne's back catalog. Indeed, it's his highest-ranking album on Rolling Stone's 2003 list of the 500 Greatest Albums of All Time, although an arguably more impressive accomplishment is that it was cited as his masterpiece when he was inducted into the Rock and Roll Hall of Fame by Bruce Springsteen.
Although the songs "Walking Slow" and "Fountain of Sorrow" were both released as singles, neither made the charts, but various songs from the album have become standards over the years, including the title track, which can be heard in the film "Taxi Driver", and "For a Dancer." In addition, Joan Baez drew attention to "Before the Deluge" when she covered it for her 1979 album Honest Lullaby.

B1. The Road And The Sky
B2. For A Dancer
B3. Walking Slow
B4. Before The Deluge