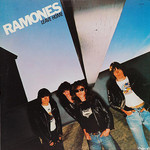 1977 saw Ramones release two great albums in the same year, and Leave Home was the first to be released in January of that year, as the follow-up to their eponymous debut album.

This 30-minute opus of buzzsaw rock introduced fans to classics like "Pinhead" "California Sun," and "Swallow My Pride." This release will feature the audio from the Leave Home 40th Anniversary Edition - remastered by original Leave Home album engineer/mixer Ed Stasium.