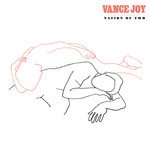 Introduced to the world via the ukulele-led charm of instant classic and gold certified 'Riptide', Vance Joy (born James Keogh) consolidated on that first impression with further anthems 'Mess is Mine', 'Georgia', 'Fire and the Flood' and 'Straight Into Your Arms'.

It was only during 2016 that Joy and his trusty band finally wound down from nearly three years of global touring to start working on Album #2.

"I just wanted a solid second album, one that would stay at the same level, maintain the standard. More solid songs I'm proud of."

However for sophomore album Nation of Two Joy wasn't starting totally from scratch.

He tapped back into his youth for the stunning 'Little Boy' - a tale of a childhood accident and growing up in the Melbourne suburbs. "I'm glad I could get a bit more personal on this album with a song like Little Boy," he says.

Elsewhere, his trusty mobile phone was a very modern archive of some vintage lyric and music ideas. One pre-prepared riff salvaged by Dan Wilson - who has worked with Adele, Halsey, Pink and Taylor Swift, and with whom he wrote a handful of Nation of Two tracks - became 'Like Gold', and was released as an early taste of the album for hungry fans.

Another song Wilson helped bring to life is album highlight 'We're Going Home'. "I've had that song in my pocket since 2015," Joy says. "I had the demo for a while. I'd tried writing it a few times but working with Dan we finally got the right vibe."

Nation of Two's first single 'Lay It On Me' was another song Joy had half-prepared earlier. "I'd actually given up on the guitar riff that starts the song, but I played it to Dave Bassett (Rachel Platten, Fitz and the Tantrums) who I wrote it with and he thought it was cool." Cool might be an understatement - the track is just about to tick over 2× platinum in Australia and has made a steady climb to the top of the Alternative Charts in the US.

Complementing the dynamic song-writing, it's fair to say that the Melbourne turned global star is sounding better than ever on Nation of Two. Joy's compelling vocals dance around thoughtful lyrics and luscious melodies, and while he may have the special skill of making it all sound effortless, every word and metaphor is there for a reason. The album's title came from Keogh marrying his Kurt Vonnegut phase with a book by Richard Ford called Between Them.

"The phrase Nation of Two reminds me about how your world begins and ends whenever you're with that one person. It felt right."

He even drew the album's striking cover art himself.

Now, with a swag of exquisite new material added to his already impressive repertoire, comes time to start the crazy cycle all over again. His March Tuning Fork show sold out in five minutes and he has just announced a return to NZ, with full band on September 29 this year.