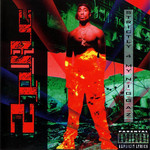 Strictly 4 My N.I.G.G.A.Z... is the second studio album from Tupac Shakur. The title is an acronym for "Never Ignorant Getting Goals Accomplished'; the "Z" in the title makes it a plural. Similar to his debut, "2Pacalypse Now", the album contains many tracks emphasising 2Pac's political and social views. This album saw more commercial success than its predecessor. While Tupac's first effort included a more underground or indie-rap-oriented sound, this album was considered his "breakout" album. It spawned the hits "Keep Ya Head Up" and "I Get Around" and has since reached double platinum status. In honor of this classic albums 25th anniversary it will be reissued on 2LP, 180 gram black vinyl for the first time.