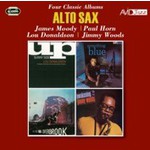 AVID Jazz is proud to introduce an exciting new addition to our Four Classic Album series, Four Classic Jazz Instrumentalists. We continue with Four Classic Jazz Alto Saxophonists, a re-mastered 2CD set complete with original artwork, liner notes and personnel details.
"James Moody: Last Train From Overbrook"; "Paul Horn: Something Blue"; "Lou Donaldson: Sunny Side Up" and "Jimmy Woods: Awakening"
For our next release in this new series we have chosen a diverse range of jazz alto saxophonists who released their debut albums from the mid 1950s to the early 1960s. James Moody had a long career in jazz beginning in the 1940s and stretching into the 2000s! Perhaps best known for his work with his life-long friend Dizzy Gillespie with whom he spent many years both recording and touring with. When he wasn't with Dizzy he managed to find the time to play with the likes of Miles Davis, Lionel Hampton and Max Roach as well as leading his own fine bands on many splendid albums under his own name. We feature his "Last Train From Overbrook" recorded in Chicago in 1958 after he had recovered from a spell in a mental asylum (For his Four Classic Album release check out AMSC1261). Paul Horn presents jazz with a little bit of an edge with his quintet work "Something Blue" where he is joined by Paul Moer, Earl Richards, Jimmy Bond and the great Billy Higgins at the drum stool. Lou Donaldson like many great alto players was inevitably influenced by the mighty Charlie Parker during his early bebop days before developing his own more distinctive soulful and bluesy style. In his long and prolific career, which still continues to this day, Lou has played with just about anyone who is anyone in the jazz firmament. Beginning his recording career in the 1950s working with the likes of Art Blakey, Thelonious Monk, Blue Mitchell, Horace Silver and Clifford Brown, he went on to make many great soul jazz albums in the 1960s with the likes of Grant Green, George Benson, John Patton, Lonnie Smith and Charles Earland. Our selection still finds Lou in his hard bop phase and features Horace Parlan, Bill Hardman, Al Harewood, Sam Jones and Layman Jackson (For his Four Classic Album release check out AMSC1251). Jimmy Woods was another jazz musician who started his musical career playing in R&B bands before turning to jazz. He played with the likes of Ray Milton, Joe Gordon (AMSC1293), Elvin Jones, Harold Land, George Tucker and the great and late lamented pianist Andrew Hill. According to our enquiries, Woods retired from the music business in the late 1960s and was never really heard from again! That's a shame, because this album is a corker!