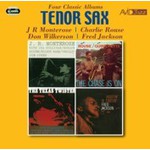 AVID Jazz is proud to introduce an exciting new addition to our Four Classic Album series, Four Classic Jazz Instrumentalists.
The idea behind the series is to include many artists who for a variety of different reasons do not have four of their own albums available. The focus of each set will be on one particular instrument. The series will include artists who, maybe only ever released one or two albums under their own names, or spent many years as side-men before leading their own units, or led their own units before returning as sidemen due to perhaps commercial failure or those who had to return to their day jobs due to lack of recognition and/or success, or those who perhaps suffered early trauma or even death through illness (mental and physical) alcohol or drugs or just by sheer accident. And of course, those who maybe only made one or two albums up to the magical year of 1962. Our new series will feature many examples of all the above occurrences!
We continue with Four Classic Jazz Tenor Saxophonists, a re-mastered 2CD set complete with original artwork, liner notes and personnel details.
"J. R. Monterose: J. R. Monterose"; "Charlie Rouse: The Chase Is On"; "Don Wilkerson: The Texas Twister" and "Fred Jackson: Hootin' 'N Tootin'"
For our second release in this new series we have chosen a diverse range of jazz tenor saxophonists who released their debut albums from the mid 1950s to the early 1960s. J.R. Monterose spent most of his musical career as a sideman to the likes of Buddy Rich, Claud Thornhill, Teddy Charles, Charles Mingus and Kenny Dorham. Not a bad list of players to be hanging out with! Of his very few solo albums we feature his Blue Note debut from 1956 in which he plays some driving hard bop alongside a pretty good line up of players including Horace Silver, Ira Sullivan, Wilbur Ware and the great Philly Joe Jones on the drums. On listening to this album you may agree with jazz historian and writer David Brent Johnson who is quoted as describing Monterose, as, "the best tenor you never heard". Charlie Rouse alongside companion, good buddy and fellow tenor saxophonist Paul Quinichette produced a cracking debut album in "The Chase Is On" which means as far as we here at AVID are concerned, not only do you get to hear a fine swinging bop album, but you also get "Two tenor saxophonists for the price of One!" Oh and how's this for a line up, Hank Jones, Wynton Kelly, Freddie Green, Wendell Marshall and Ed Thigpen. Don Wilkerson made four great albums in the sixties and we feature his classic debut "The Texas Twister" released in 1960. Don was another player who started out on the R&B circuit accompanying Ray Charles, Amos Milburn and Clarence "Gatemouth" Brown to name but a few. On the jazz side he played with Grant Green and Cannonball Adderley amongst many others. For "Texas Twister" which was produced by Cannonball Adderley, he is joined by Nat Adderley, Barry Harris, Leroy Vinnegar, Sam Jones and Billy Higgins. Fred Jackson, who is still going strong at nearly 90 years old started his musical life as an R&B saxophonist accompanying such stars as Little Richard, Lloyd Price and Chuck Wills. He began his jazz career in the early sixties playing with two of the greatest jazz organists in the business in Baby Face Willette and the renowned Big John Patton. Here we feature Fred's only album under his own name, where hard bop meets funky soul jazz in Hootin' and Tootin'. The band comprises Willie Jones on guitar, legendary funk organist Earl Van Dyke and Wilbert Hogan on drums.