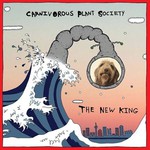 It was in a dystopian world (with a working title of Dismal Imaginary Place deemed too depressing) that Carnivorous Plant Society's sophomore album The New King was born, simultaneously aspirational and pragmatically nihilistic. With fables penned by bandleader Finn Scholes and read by his father Jeff, Finn reveals his warped genius in three ways; lyrically, through his rich compositional tactics and with his ear-wrenching instrumental virtuosity.

The New King brings together the extraordinary talents of five of Auckland's most talented musicians with special guests Lawrence Arabia, Don McGlashan and Tiny Ruins.

"Car Dance came to me while sitting in traffic," says Finn. "I noticed that when two cars switch lanes it kind of looks like they're dancing. This dance combined with the struggles of being stuck in traffic brought to me fantasies of escape. I knew right away that Hollie's voice would be perfect for the tune because it has a child like quality that reminds me of a kid stuck in the back of a car with dreams of freedom. The second half of the piece is supposed to represent the happy place these children would escape to should they achieve their dreams." says Finn.

"I lived with four members of Carnivorous Plant Society for three years. We would all be working on our various musical projects under the big pitcher plants hanging above the lounge table.
It has been a wonderful thing to see them move from one eclectic field of sound to the next. It always fills me with so much joy seeing them play and so of course I leapt at the chance to sing on this most beautiful song - Car Dance - a classic Finn Scholes brain-gem." says Fullbrook.