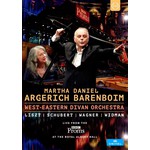 The Proms don't come more stellar than this! Daniel Barenboim and his West-Eastern Divan Orchestra would have comfortably filled the hall on their own, while Martha Argerich could have filled it three times over" - The Independent

The West-Eastern Divan Orchestra are not only an internationally-acclaimed touring orchestra but also a symbol of tolerance and understanding between people. Their Prom opens with Jörg Widmann's riotous overture Con brio, which uses fragments of Beethoven's Seventh and Eighth Symphonies and looks at them through a 21st-century prism.

Orchestra and conductor are joined by the legendary Martha Argerich. Argerich, gives an "unforgettable performance" of Liszt's Piano Concerto No. 1 dazzling the audience with "her playing as frighteningly precise as it has always been." - The Guardian

For the encore, the two childhood friends join forces at the piano for a four-handed rendition of Schubert's Rondo in A which "for 12 minutes provided a glimpse of paradise" - Evening Standard, holding "6000 people spellbound" - The Times

The concert is completed with popular excerpts from Wagner's Tannhäuser and The Mastersingers of Nuremberg - both of which feature a song contest at their heart - as well as from Götterdämmerung, the final instalment of Wagner's Ring.