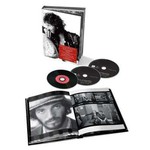 The only full length concert film ever released of Bruce Springsteen & The E Street band's first 25 years. Digitally restored from the original negatives. Remixed in both Stereo and 5.1 Surround Sound.

The set also includes a Documentary DVD, Wings For Wheels: The Making of Born To Run. A 90 minute doc chronicling the definitive story of the making of 'Born To Run', from song writing to production and beyond. Incorporates newly filmed interviews with Springsteen and the E Street Band including former band members who played on the album, as well as the production team. Finally, a digitally remastered CD of Born To Run, presented in remastered digital sound.