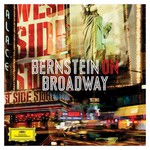 Leonard Bernstein was both a brilliant orchestrator and a gifted tunesmith, and his lyrics, often penned by Stephen Sondheim, are memorable, razor sharp and brilliantly apposite. West Side Story, Candide and On the Town have taken their rightful places at the top of Bernstein's creative canon; Now, as part of Deutsche Grammophon's celebrations of his centenary, the best-loved numbers from these Broadway shows are brought together in one indispensable collection.

DG's recording of West Side Story, made in New York, in September 1984, represents Bernstein's final vision for his great American musical. This wasn't a typical 'cast recording': everybody was recruited especially for the job and moulded, literally overnight, into a musical team; and for Bernstein, who had never conducted the work before, it was an opportunity to explore the work as he had envisioned it.

Michael Tilson Thomas's recording of On the Town features an inspired cast, and a more perfect pairing of soloists has seldom graced a Broadway show.

The performances from Candide are drawn from Bernstein's last-ever studio sessions and represent the composer's final thoughts on his great opera. Moreover, DG's version of it is seen as the definitive statement of one of his greatest and most accessible compositions, created just eleven months before his untimely passing.

On The Town:
New York, New York
Taxi Number: Come Up To My Place
Carried Away
Lucky To Be Me
Ya Got Me

Candide:
Overture
Life Is Happiness Indeed
Oh, Happy We
Glitter And Be Gay
I Am Easily Assimilated
Make Our Garden Grow (Finale)