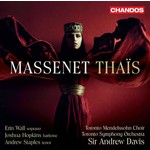 Following acclaimed performances at the Edinburgh Festival and then in Melbourne, Sir Andrew Davis's recording of Massenet's opera Thaïs features an outstanding cast, and exceptional performances from his Toronto forces. Written shortly after the premiere of his masterpiece Werther, Thaïs was composed for the Californian soprano Sybil Sanderson who gave the premiere at the Paris Opéra In 1894. Sanderson's performance was a triumph, but the opera itself had a mixed reception. After Massenet revised it in 1898 it went on to worldwide success in the years leading up to World War I and has enjoyed continuous and growing success in our own time. The role of Thaïs has drawn many great artists, including Mary Garden, Geraldine Farrar, Maria Jeritza, Leontyne Price, Beverley Sills, and Renée Fleming. According to the Financial Times, 'Erin Wall is the Thaïs of one's dreams, wielding a soprano of radiance, pristine beauty and tingling top notes", and she is joined on the recording by Joshua Hopkins in the role of Athanaël, while Nicias is sung by Andrew Staples. Recorded in Toronto's Roy Thompson Hall, following live performances, in Surround Sound.