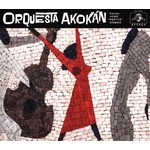 Direct from Cuba! Daptone Records is proud to introduce Orquesta Akokán, a big band collective of Havana's top musicians both young and old, joining forces with some of the most creative and spirited talents of New York's Latin music scene. Born out of a shared vision by singer José "Pepito" Gómez, producer Jacob Plasse, and arranger Michael Eckroth, the group reinvigorates the sound of the golden era of Cuban mambo with a bold new energy. Featuring all-original music cut live to tape over a three day session at Havana's hallowed state-run Estudios Areito - one of the longest operating studios in the world and where seminal Cuban records have been made since the early '40s, and more contemporarily with the 1997 release of the Buena Vista Social Club album - the group's self titled debut feels like a heartfelt gift from the band to listener. Which is no coincidence being that Akokán is a Yoruba word used in Cuba meaning "from the heart", and indeed every song presented hear is just that.