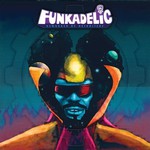 17 tracks by the most influential band to emerge from Detroit in the 1970s are reworked by the crème de la crème of Detroit producers such as Amp Fiddler, Andrés, Dirtbombs, Ectomorph, Gay Marvine, Alton Miller, Moodymann, Marcellus Pittman, Anthony 'Shake' Shakir and Underground Resistance.

Everyone jump on board to spin out some serious, late night smokers grooves… Deep as you like, but would you really expect anything less?

"The results are stunning, as they twist the disco, funk and psychedelia into fresh and crisp patterns." 9/10 - Mixmag

"Fantastic remixes that have clearly been perfected due to a love of the band from this set of inventive musicians." 8/10 - Louder Than War

"It's clear from the results here that the task of reworking Funkadelic wasn't taken lightly." 3.6/5 - Resident Advisor