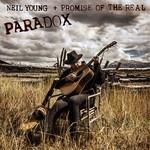 Neil Young recorded the music for the Paradox soundtrack on the MGM soundstage with three different groups: Promise of the Real, an orchestra, and another backing band comprised of Jim Keltner, Paul Bushnell and Joe Yankee.

Paradox (the film) is written and directed by Daryl Hannah, and features Neil Young + Promise of the Real. Young plays "Man in the Black Hat" in the movie, which focuses on a band of outlaws and cowboys who "pass the days digging for treasure while they wait for the full moon to bring its magic, the music and let the spirits fly".