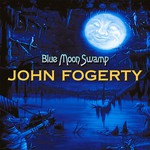 Blue Moon Swamp would go on to receive gold certification by the RIAA.

With a career spanning more than 50 years, John Fogerty is hailed as one of the most influential musicians in rock history.

As the writer, singer and producer of numerous classic hits including 'Born on the Bayou', 'Green River', 'Proud Mary', and 'Bad Moon Rising', Fogerty has been honoured as one of the 100 Greatest Guitarists, 100 Greatest Songwriters, and 100 Greatest Singers by Rolling Stone.

A1. Southern Streamline
A2. Hot Rod Heart
A3. Blueboy
A4. A Hundred And Ten In The Shade
A5. Rattlesnake Highway
A6. Bring It Down To Jelly Roll

B1. Walking In A Hurricane
B2. Swamp River Days
B3. Rambunctious Boy
B4. Joy Of My Life
B5. Blue Moon Nights
B6. Bad Bad Boy