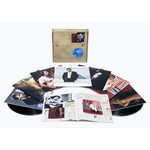 Bruce Springsteen The Album Collection Vol. 2, 1987 - 1996 is comprised of remastered editions of the five studio and live albums recorded and released by Bruce Springsteen for Columbia Records between 1987 and 1996 - plus, as an added bonus, remastered editions of the Eps 'Chimes Of Freedom' and 'Blood Brothers' (available for the first time on vinyl).

These seven titles are presented in recreations of their original packaging and accompanied by a 60-page book featuring rarely-seen photos, memorabilia and original press clippings from this chapter of Springsteen's recording career.