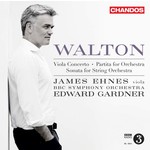 In this third volume of Edward Gardner's Walton series with the BBC Symphony Orchestra, James Ehnes leaves his violin to tackle the taxing soloist role in the Viola Concerto. In a recent Strad interview, Ehnes confesses: 'This is a piece I have loved since I was a teenager, so it is wonderful that the opportunity has come my way to record it... With Walton's Viola Concerto, none of the writing is impossible but a lot of it is close. And in a way that is exactly where you want it to be: on the edge of technical limitations. There's a tremendous amount of excitement in that.' This album in surround sound also features two much later works: the 1957 Partita for Orchestra and the Sonata for String Orchestra, adapted in 1971 from the String Quartet in A minor of 1945 - 47. There is a striking contrast between the uncomfortable modernism of the up-and-coming young composer's Viola Concerto and the relaxed brilliance of the mature Partita. But the Sonata shows Walton late in his life re-engaging as an arranger with his earlier manner, and so with the characteristic vein of restless unease that runs through most of his output.

"[Ehnes] eloquently masters the bittersweet wistfulness of the outer movements and the dazzling pyrotechnics we hear here...Gardner's BBC Symphony Orchestra forces play [the Partita] as the showpiece it is, revelling in its unfashionable Italianate lyricism and witty high jinks." Sunday Times