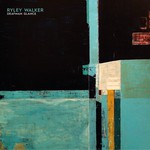 Deafman Glance, the follow-up to 2016's Golden Sings That Have Been Sung, is the second Ryley Walker album produced by LeRoy Bach and Walker himself.

Deafman Glance was largely recorded at the Minbal Studios in Chicago, with some later sessions taking place at USA Studios and in LeRoy's kitchen. Ryley plays electric and acoustic guitars and was joined by long-time 6-string sparring partners, Brian J Sulpizio and Bill Mackay, who both play electric.

"I was under a lot of stress because I was trying to make an anti-folk record and I was having trouble doing it. I wanted to make something deep-fried and more me-sounding. I didn't want to be jammy acoustic guy anymore. I just wanted to make something weird and far-out that came from the heart finally. I was always trying to make something like this I guess, trying to catch up with my imagination. And I think I succeeded in that way - it's got some weird instrumentation on there, and some surreal far-out words. And it's more Chicago-y sounding. Chicago sounds like a train constantly coming towards you but never arriving. That's the sound I hear, all the time, ringing in my ears." - Ryley Walker