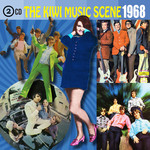 Celebrating the 50th anniversary of 1968, New Zealand music's most successful year. 19 kiwi tracks reached the Top 10 in 1968, a record that stood for 40 years! This vibrant and colourful year has now been compiled as a double CD set featuring 58 tracks and a 16 page chronological timeline booklet.

1968 was the most successful year for New Zealand music during the last millennium.
There were over 120 singles released by local artists, of these 88 were aimed at the pop music market. 21 releases charted in the National Top 20 with a staggering 19 going on into the Top 10 making 1968 a landmark year for local music, a record that stood for over 40 years. It was also a year of change across all aspects of the industry. The local record label landscape changed dramatically from the previous years. Since recorded music started in New Zealand it was predominantly the small indie labels such as Zodiac, Viking, Prestige,Viscount and Impact among a host of others who ruled the release sheets during the preceding years, while the local branches of major such as HMV and Philips generally lagged behind in both quality and quantity.

During the previous year (1967) HMV slowly upped the ante and with a new studio complete with a new 4 track desk finally realised their hit-making potential. New producers were added to their already proficient engineering and A&R staff and they soon built up an impressive catalogue of local recordings that still sound relevant and fresh 50 years later. Philips Records went into hibernation and their place was taken by Polydor who set about signing a sway of local artists including Ray Columbus, The Dedikation, The Shevelles, The Chicks, Tommy Ferguson and John Rowle's brother Frankie Price. By comparison, it was a quiet year for the usually productive indie labels. Eldred Stebbing's
Zodiac Records scaled down their releases and didn't sign any new acts that year while seeing out the contracts of their existing roster as they instead invested all of their resources into the construction of a new studio which eventually opened in 1971. The usually busy Viking label only released one local single that year which was a Maria Dallas track recorded in Nashville with Elvis Presley's producer Felton Jarvis. Impact was so successful with Larry's Rebels that they didn't need to release many other artists...and they didn't.

Ray Columbus returned home after 18 months in San Francisco with a heavy West Coast accent and a skill set of new production and management skills learnt from his time in the USA. Ray threw himself into the local industry and played a large part in raising the bar of professionalism within all aspects of the local music industry.
It wasn't a big year for local compositions. folk singer and songwriter Dave Jordan who was largely unknown outside the confines of the industry won the APRA Siver Scroll for 1968 and managed to place several of his compositions with other artists while releasing a debut album of original material. Ray Columbus and Bryce Peterson (House of Nimrod) were also successful in placing their songs with other artists.
C'mon once again hit our television screens as C'mon 68 and again was a good springboard for local acts to perform their latest records to a national audience. The other tv highlight of the year was the first live broadcast of an event when the annual Loxene Gold Disc Award was screened simultaneously nationwide. A convoy of aerial equipped NZBC vans were strategically placed around the country and streamed the signal to thousands of happy homes. Before this, live events (including Rugby tests) were either recorded and played later or screened live in one centre and played at a later date in other centres. The Loxene Disc Award itself was another major success in 1968, by giving the public a say in the voting of New Zealand's top song of the year and helping to lift the standards as labels and artists competed against each other in the quest for a perfect pop song that would capture the heart of the nation.

Sales of 45 single records were down (both here and overseas) while album sales marched steadily upwards. There was a noticeable increase in the number of local albums released during 1968 and they were generally well received by fans and reviewers alike.
There was a slight changing of the guard among the local artists from the previous 2 years. Larry's Rebels went from strength to strength during the year while arguably one of the top bands of the previous 2 years The La De Da's released no new material during the year as they concentrated on establishing themselves in Australia. The Avengers who made a major splash on the scene during the last half of 1967 carried on and along with Larry's Rebels reigned supreme. Mr. Lee Grant who had an explosive hit-laden year during 1967 on the back of weekly appearances on the tv show C'mon headed to the UK in early 1968 and slowly vanished from our memories. Sandy Edmonds had been a big part of the previous 3 years and remained so for the first half of the year before relocating to Australia on a more permanent basis, within a year she had vanished only to reappear 10 years later after dropping out.
Of the new artists on the scene in 1968, The Fourmyula were the most notable and finished the year with 3 hit singles and a debut album, all in a short 5 month period. Quincy Conserve started their recording career in 1968 and along with the Fourmyula would become established acts over the next few years. Allison Durbin started her career as a school girl in 1964. The 1968 version was the complete package, with her movie star looks and a sultry, soulful and mature voice - after several years on the competitive Sydney club scene. Allison dominated the media and the Hit Parade during the end of the year which saw her win the Loxene Gold Disc award with 'I Have Loved Me A Man'.

Internationally John Rowles reached the UK charts with 'If I Only Had Time' which eventually peaked at #2 where it was sandwiched between 2 of the biggest hits of all time, Louis Armstrongs 'What A Wonderful World' and Tom Jone's 'Delilah'.The Human Instinct returned home after 18 months in the UK which saw them record for the prestigious Deram label under the production of Mike Hurst who was also producing Cat Stevens at the time. The group's drummer Maurice Greer turned down an offer to join The Jeff Beck Group whose lead singer was Rod Stewart.

Disc One
LARRY'S REBELS Everybodys Girl
THE AVENGERS Love Hate Revenge
THE SIMPLE IMAGE Spinning Spinning Spinning
THE FOURMYULA Come With Me
HI REVVING TONGUES A Tropic Of Capricorn
ALLISON DURBIN I Have Loved Me A Man
MR. LEE GRANT Bless You
SANDY EDMONDS When You Walk In The Room
RAY COLUMBUS Happy In A Sad Kind Of Way
GENE PIERSON Toyland
SHANE Town Of Tuxley Toymaker
THE CHICKS What Am I Doing Here With You
YOLANDE GIBSON Hush
AHMED DAHMAN GROUP Stagedoor
QUINCY CONSERVE I'm So Proud
THE CASTAWAYS Baby, What I Mean
ALLISON DURBIN Don't Come Any Closer
LARRY'S REBELS Do What You Gotta Do
THE AVENGERS I941
ABDULLAH'S REGIME Sally I Do
TOMMY ADDERLEY Sunday Sun
MR. LEE GRANT Why Or Where Or When
GENE PIERSON You Got To Me
DAVE MILLER SET Everybody Get Together
THE HUMAN INSTINCT Renaissance Fair
DALLAS FOUR Hush
THE UNDERDOGS Hey Gyp
TROUBLED MIND Under My Thumb
LARRY'S REBELS The Jingle For Coca Cola

A Day In My Mind's Mind Volume 5

Let Me Take You Down...Under

The Musical Adventures of The Clevedonaires, Cleves & Bitch
more suggestions…