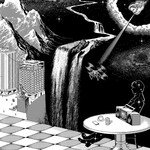 Babelsberg is the fifth album by Gruff Rhys and his first record for Rough Trade since 2007's Candylion.

Babelsberg's ten tracks were initially recorded in early 2016 in a whirlwind three day session that took place before producer Ali Chant's studio was demolished. The band he gathered for the record were his regular drummer Kliph Scurlock (ex-Flaming Lips), and multi-instrumentalists Stephen Black (Sweet Baboo) and Osian Gwynedd. The tracks then hibernated for eighteen months, awaiting orchestral scores by Swansea based composer Stephen McNeff and the incredible work of the 72 piece BBC National Orchestra of Wales.

Over the course of Babelsberg's songs, Gruff manages to perfectly document our troubled and troubling times with humour, grace and always addictive melody. The lyrics on it take on subjects such as the smoke and mirrors of division at the heart of our major cities, the 21st century's new forms of state sponsored murder, the numbing effect helplessness of the 24-hour news cycle and the rise and rise of the delusional male ego. To counterbalance Babelsberg's lyrical themes, each of these ten tales of the fear-and-now is set against gorgeous, honeyed sound.