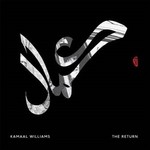 Holding the torch for a new generation of jazz musicians, a light that has been passed across the seas by Thundercat and Kamasi Washington, Kamaal Williams debuts his new label Black Focus with his highly anticipated album The Return. Known for his critically acclaimed project as Yussef Kamaal on Brownswood, and his more dancefloor focused tracks as Henry Wu that has featured on Eglo, MCDE and Rhythm Section. The Return is a rich tapestry of his influences of visionary jazz woven together with the sounds and signals of South London Streets.

Already regarded as a true figurehead within the new wave of jazz and the refreshed hip-hop beat scene that he has helped build from the start, Kamaal Williams has been an in-demand artist who has tirelessly and consistently perfected his craft as both Henry Wu and half of the Brownswood group Yussef Kamaal. Adding to the list of long sold out 12"s as Wu, it was with longtime supporter Gilles Peterson on the label side that Kamaal alongside Yussef Dayes created the now a modern-classic album Black Focus. A record that arguably captured the very best moments of improvised rhythmic jazz and cut it to wax, and in doing so gifted us with one of the decade's most widely adored albums. Now, some two years later Kamaal Williams has returned in solo mode with an album that not only builds on the very best elements of Black Focus but also surpasses it with some astonishing arrangements. The Return is an album that is both daringly progressive and funky yet ticks all the right boxes for those looking to dip into some cosmic, exploratory and effortlessly enjoyable visionary sounds.

Much like late-era 4 Hero and the current US connections of Kamasi Washington and Thundercat, Kamaal Williams is using the tones and textures of jazz as a jumping off point to explore a new era of street-level soul that is as equally influenced by the coolest corners of hip-hop. Looking out of the studio window toward the hustle and bustle of the London streets of which Kamaal and crew live and breathe, and backed with a wealth of knowledge and a record collection jam-packed with jazz, hip-hop, funk and fusion as well as some of the best house and techno.

Kamaal Williams The Return is both a true step forward for the sound that Yussef Kamaal were progenitors of, yet also opens the door wide for us and everyone else following in his footsteps to step through and experience one of the most exciting musical movements London has had in years.