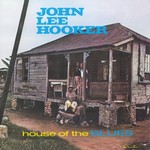 One of the true masters from the blues, John Lee Hooker, developed his own musical style during the 50s and 60s. His recordings during the period 1951-1954 are collected on the album House of the Blues. You can feel the thrilling blues while listening to his heartbreaking blues story's. With his characteristic voice and his own interpretation of the boogie he was rightly named "King of the Boogie". On the album you'll find deeply effective songs like "Walkin' the Boogie" and "Ground Hog Blues". It's a fine compilation of some of his best work from his Chess period. Classics like "Leave My Wife Alone," and "Louise" can be classified true gems.

John Lee Hooker never slowed down during his longtime career as a musician. Onwards from the mid-40s he recorded a few hundred songs. During the folk movement in the 60s he was rediscovered and introduced to a new public.