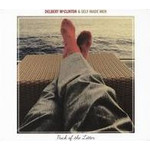 At 76, Delbert McClinton still delivers the goods as a singer and songwriter. While it's true that his vocal delivery is a tad more grainy and not quite as powerful as in decades past, like all great stylists, he's learned to compensate and is no less expressive as a result. Despite its title, Prick of the Litter is the gentlest album he's ever released. The set showcases a softer side of his instrument in beautifully arranged tunes that derive inspiration from the songs of Johnny Mercer and Nat King Cole, Percy Mayfield (whose "The Hunt Is On" he covers here), Solomon Burke, and even Louis Armstrong. With his working band the Self-Made Men (keyboardist Kevin Mckendree, guitarist Bob Britt, bassist Michael Joyce, and drummer Jack Bruno), backing vocalists Vicki Hampton and Wendi Moten, and guests ranging from Lou Ann Barton and Jimmie Vaughan to Al Perkins and Glenn Clark, McClinton delivers tunes that range from airy ballads and grooving jump blues to classic American pop and swing. First single "Like Lovin' Used to Be" is a perfect illustration of the album's roomy, intimate sound. With brushed snares and hi-hat, acoustic guitars, walking bassline, and a lilting jazz piano, McClinton evokes the spirit of Mercer as his backing singers slide in just behind him. Jim Hoke's smoky tenor saxophone adds fills and a lovely solo. "Doin' What You Do," with its sultry twin voicings of B-3 and Rhodes, Britt's spidery guitar, and his own harmonica offer a nocturnal vibe to suit the humid, sensual groove for the singers to interact with. "Don't Do It," a relaxed shuffle, could have been recorded at any time in McClinton's long career. It's classic roadhouse R&B with swinging horns, Vaughan's chunky, biting lead lines, and Barton's soulful wail complementing the frontman's grit and grain. Clark adds a harmony vocal to his co-write on the woolly "Skip Chaser" with greasy horns and guitars. McClinton gets to use his still formidable -- albeit a bit rougher -- falsetto on the sensual soul ballad "Middle of Nowhere" that recalls Burke. The Mayfield tune cooks with a punchy horn stomp as McClinton's delivery simmers just beneath it. And that Satchmo thang? Check "Jones for You." Both the singer and Tim Quimette's trumpet pay homage to the master's easy swing -- though McClinton's humorous lyrics are coarser than anything Armstrong would abide. The set closes with the shuffling, summery swing of "Rosy,' driven by McKendree's Henry Butler-esque NOLA blues piano and Ray Agee's tender, muted trombone solo. McClinton doesn't try to reinvent the wheel on Prick of the Litter, but he doesn't have to; his voice, despite his age, was made for songs like these, while the charts and band performances are equally inspired. This is a memorable date in a catalog full of them