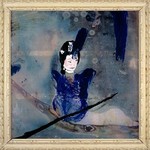 A group of New York mainstays cross in and out of the Onyx universe and often performing live with the band, including Nick Hakim, Princess Nokia, Dev Hynes (Blood Orange), Wiki (Ratking), Julian Soto and Felix Pastorius. Onyx members quietly feature on a bevy of other artists' records too, with Barr himself recently boasting 3 features on the new David Byrne album and making a cameo in Ibeyi's live band for their performance on The Late Show with Stephen Colbert.

Whereas previous Onyx Collective projects capture New York City's more romantic facets, "Lower East Suite Part Three" has a much more ominous sound, reflective of the dissonance that accompanies life in the city. After being forced out of their original practice space due to rising rent, Onyx Collective relocated their headquarters to Magic Gallery on Market St, located in a gritty pocket of Chinatown by the East River. "When I wrote the record I was thinking about concepts like eviction and gentrification," explains Barr. "The record is born out of the challenges of being in New York."

Recorded at Magic Gallery, "Lower East Suite Part Three" is the first release from Onyx Collective composed of entirely written music. "The record is a graduation for us - from not just having a microphone at a session and spontaneously recording," says Barr. "This is us doing it on our own, with our own engineer, with a very low budget. That survival is really what I think jazz is: creating with your surroundings, and making something that's a picture of that."

While the new music is more premeditated than the impromptu nature of their previous work, New York's deafening influence remains present. "To some degree it's controlled, but how much is it actually controlled?" continues Barr. "At the end of one of the songs you can still hear a siren from the street. Because we weren't in a professional studio, it's not a controlled environment. We're still in New York."

The group are known for their impromptu performances in both rugged DIY spaces and esteemed clubs alike. Onyx runs a manic energy through their classical training to create a show that at times feels as punk as it does jazz. Following a run of headline UK shows at the start of the year - which included playing to a full house at the legendary Ronnie Scotts - they return to the UK this Spring in support of Kamasi Washington, including a stop at London's Roundhouse on 4th May.

1. ONYX Court
2. Don't Get Caught Under the Manhattan Bridge
3. Battle of the Bowery
4. There Goes the Neighborhood
5. 2AM at Veselka
6. Delancey Dilemma
7. Rumble In Chatham Square
8. Eviction Notice
9. Magic Gallery
10. FDR Drive