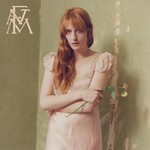 High As Hope is the band's fourth and the follow-up to 2015's How Big, How Blue, How Beautiful. For the first time, Florence Welch co-produced the album, working with prominent pop producer Emile Haynie; the two previously collaborated on three songs for the Final Fantasy XV soundtrack in 2016. Welch also tapped contributors including Kamasi Washington, Sampha, Tobias Jesso Jr., Kelsey Lu, and Jamie xx.