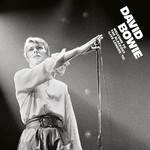 $37.00 In stock with supplier
ETA: 2-5 business days add to cart more by this artist

This live album features performances recorded at Earl's Court in London on 30 June and 1 July, 1978 during Bowie's "Isolar II" Tour. The music was released earlier this year on vinyl as a strictly limited-edition triple-LP set for Record Store Day 2018.

Tony Visconti, who produced more than a dozen albums for Bowie throughout his career, recorded the 1978 concert which was later mixed by Bowie and David Richards. The set naturally focuses on songs from the two albums Bowie released in 1977 - Low and "Heroes" as well as other earlier career highlights such as "Fame", Ziggy Stardust", "The Jean Genie" and "Station To Station" and the first ever live performance of "Sound And Vision" included in this set was its debut live performance.