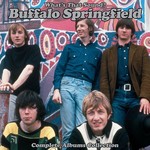 This premium boxed set includes all three albums released by the band in their three years together between 1966-1968. The music is newly remastered from the original analog tapes, all under the auspices of Neil Young.

Buffalo Springfield formed in Los Angeles in 1966 and recorded three albums before breaking up just two years later. Their single "For What It's Worth," from the debut album, reached the Top 10 in early 1967 and became one of the era's greatest and most enduring protest songs. Over the next couple years, Young, Stills and Furay contributed other classic songs (including Stills' "Bluebird" and "Rock 'N' Roll Woman" and Young's "Broken Arrow" and "Mr. Soul") to the folk-rock scene before the members split into successful careers elsewhere.