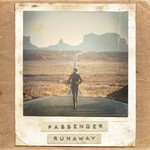 There have always been two sides to Passenger (Mike Rosenberg): the epic, radio-friendly sound and the more introverted singer-songwriter side. Runaway finds Passenger embracing the epic once again: the melodies are unforgettable, the choruses colossal.

The album was recorded between the UK and Australia, but its aesthetic is North American, thanks in large part to his American father who organized trips back to the States every other summer while Mike was growing up in Brighton. While some songs point to specific locations such as Yellowstone or Detroit, Mike imagined all the new songs unfolding against a backdrop of American landscapes, which led to a month long road trip across the US to create a series of live acoustic versions of each album track and videos to match.
Sonically, too, Runaway draws on Americana more so than past Passenger albums. There is some lap steel, some mandolin, a little banjo, all courtesy of guitarist Benjamin Edgar. Rosenberg is also joined on the album by keyboard player Jon Hansen, bassist Rob Calder and drummer Peter Marin.