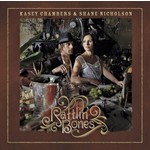 Initially released in 2008, Rattlin' Bones was a sparse, primarily acoustic set she wrote and recorded in collaboration with former partner Shane Nicholson. With its concise arrangements and Appalachian accents, Rattlin' Bones plays like an effort to reclaim some of the country feeling she gave up on Carnival and return to more familiar surroundings, except for one little thing - this is as a compelling an album as Kasey Chambers has ever made.