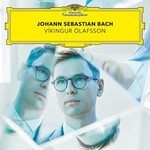 Víkingur Ólafsson is a musical free spirit with a mission. He first made the classical world sit up and listen in early 2017 with his recording of solo piano works by Philip Glass - a fascinating journey through the time and space of their minimalist structures. Glass is now followed by Bach. Ólafsson's second Deutsche Grammophon album, the pithily entitled Bach, contains a mixture of original works and transcriptions, which the pianist has woven together in intriguing style.

"It would all mean nothing without Bach," says Ólafsson. "If Glass's music is minimal, then Bach's is maximal!" Having studied his music intensively, he here casts new light on some of the composer's many different faces. Excerpts from the Well-Tempered Clavier such as the Prelude and Fugue in E minor, BWV 855 or contrapuntal gems such as the Sinfonia No. 15 in B minor, BWV 801 showcase him as, in Ólafsson's words, "the master of the short story", while the larger-scale but playful Aria variata, BWV 989 forms the structural heart of the album. The original works are juxtaposed with colourful contributions from other composers, including Rachmaninov's arrangement of the Gavotte from the Partita No. 3 for Violin in E major, BWV 1006; Busoni's transcription of the chorale "Ich ruf zu dir, Herr Jesu Christ"; and Ólafsson's own mesmerising transcription of the first aria from the solo cantata for alto "Widerstehe doch der Sünde". As his Glass album demonstrated, the pianist is an intelligent and innovative sculptor of sound, an artist who defies conventional categorisation and is redefining classical music. On Bach, the 34-year-old's lean but immensely expressive playing captivates listeners, his eloquence and the sensuous delight he takes in experimentation holding them spellbound.

"I expected this to be good; but just how good it was was still a surprise…Ólafsson creates a ravishing musical sequence. Every track has its own allure, and many reflect a virtuosity which is never flaunted; he treats the preludes and fugues as though they had been conceived as tone-poems or études." BBC Music Five Stars

"Here is an artist who palpably adores and reveres JSB in equal measure, and makes sense of a programme that could have sounded bitty…In terms of pianistic lineage, Ólafsson combines the fantasy of Maria João Pires and Martha Argerich with the contrapuntal élan of Piotr Anderszewski. But he is very much his own man." Gramophone

"There is much to enjoy here, nonetheless: highlights include the Concerto in D minor after Marcello (which has earned notoriety for being featured in 50 Shades of Grey) and the Fantasia and Fugue BWV 904. With a recording of stunning clarity made in Reykjavík's Harpa Concert House, all the shades - grey or otherwise - make their mark." International Piano