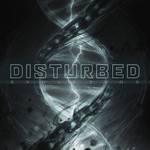 Evolution arrives in the wake of the group's 2015 full-length Immortalized, which became their fifth consecutive #1 debut on the Billboard Top 200, earned a platinum certification, and yielded the triple-platinum crossover smash "The Sound of Silence". The latter received a nomination at the 2017 GRAMMY(r) Awards for "Best Rock Performance".

Evolution makes good on the promise of its title. Disturbed unwaveringly cling to the uncompromising spirit that solidified them as a history-making force, while boldly progressing at the same time. Reteaming with Immortalized producer Kevin Churko behind the board at the Hideout in Las Vegas, the musicians - David Draiman [vocals], Dan Donegan [guitar], Mike Wengren [drums], and John Moyer [bass] - retain their signature thunderous grooves and hypnotic heaviness as they further refine their ambitious melodies and penchant for progression, spanning the gamut of their potential.