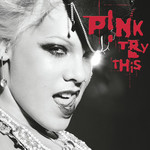 Limited double 150 gram vinyl LP pressing including digital download. Try This is the third studio album by singer/songwriter Pink. It was released on November 11, 2003. It featured the singles "Trouble, " which earned Pink a Grammy Award, "God Is a DJ" and "Last to Know". Try This was certified platinum by the RIAA. Most of the tracks were produced and co-written by punk band Rancid singer and guitarist Tim Armstrong, whom Pink met through a mutual friend at a Transplants video shoot. The two hit it off and Pink ended up co-writing ten songs with him in a week when Transplants were on a tour with the Foo Fighters. Eight of these tracks appeared on Try This, which also features three songs written with Linda Perry, who co-wrote much of Missundaztood (2001), Pink's second album. The album includes a collaboration with electroclash artist Peaches, "Oh My God", and Pink's contribution to the Charlie's Angels: Full Throttle film soundtrack, "Feel Good Time" (produced by and featuring William Orbit), as a non-U.S. bonus track.