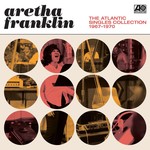 When Aretha Franklin joined Atlantic Records in 1967, it was the beginning of an unprecedented run that would ultimately cement her place as a music legend, a global household name, and one of the most influential singers of all time. Within the space of just three years, her name was almost never out of U.S Pop and R&B Top 20, garnering nine gold singles, three gold albums, as well as three Grammy® Awards and her first string of international hits.