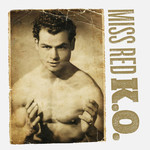 The blueprint for a futuristic new dancehall style is laid out on this debut full-length release from Miss Red, produced by close collaborator Kevin Martin aka the Bug. A fully realised and precision-tooled longplayer that sits in an outernational beat continuum alongside the likes of Jamaica's Equiknoxx, Canada's Seekersinternational and Portugal's Principe crew.

Miss Red's fierce flow rides roughshod over warped bashment anthems like "Shock Out" and "One Shot Killer", but the album also showcases her ability to adapt to different flavours with the addition of ethereal harmonies to the psyched out arcade blips of "Clouds" or the plaintive dystopian lament of "War". Similarly, the Bug's riddims are a masterclass in restraint, retaining his trademark heaviness but taking a step back from the atmospheric ambience of his recent work with Burial and Earth. Instead this is an example of the dexterity with which Martin can deploy a minimal arrangement, taking a bassline, beat, FX and vocal and sharpening those elements for maximum dancefloor devastation.

In 2015 she dropped her first solo mixtape, Murder, with The Bug's riddims supplemented with contributions from other producers such as Mark Pritchard, Mumdance and Andy Stott. Subsequent singles on her own Red label and the in-house imprint of iconic London record shop Sounds Of The Universe have sold out straight away, and she has received acclaim for her collaborations with Warp Records artist Gaika.

The Miss Red persona has developed over time spent in London and Berlin, and as a regular member of the Bug's touring line-up alongside fellow MCs Flowdan, Daddy Freddy, Warrior Queen and Riko Dan. From before she left Tel Aviv she was magnetically attracted to the sound, style and fashion of the reggae scene in Jamaica: "Nicodemus really influenced me, but as a girl, it wasn't my voice, and it was listening to those 80s dancehall gyals that i gravitated towards, because they were chatting as proud girls, and from a female perspective, so it was vocalists like Sister Nancy and Lady Ann that really made the biggest impression on me". Of K.O. specifically, she comments: "For me, reggae is the foundation of this record but the album's movement is freer. It mirrors my need to move and keep challenging myself. As a white Israeli girl working as an MC in the music industry, and in particular as a singer, it's a BIG battle to be taken seriously, and as a woman in the music industry, I am in an obvious minority, the situation is clear, the MAN is still in control - that has got to be addressed, and changed."