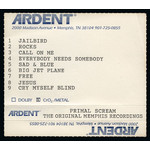 $70.00 In stock with supplier
ETA: 4-7 business days add to cart more by this artist

Primal Scream
Give Out But Don't Give Up: The Original Memphis Recordings (LP)

In 1993 Primal Scream went to Memphis to make an album with Tom Dowd and the Muscle Shoals rhythm section, that album never saw the light of day , until now.

Following the recent discovery of these tracks in a box lurking in Andrew Innes' basement, this release is the original, and previously unreleased, studio recordings from Memphis of the tracks that eventually became their 1994 album 'Give Out But Don't Give Up' .

Teaming up with legendary producer Tom Dowd and the Muscle Shoals rhythm section of David Hood (bass) and Roger Hawkins (drums) at Ardent Studios in Memphis, the resulting recordings from those classic sessions showcase the more country soul, rock'n'roll side to a band who continue to surprise. It's Primal Scream as you've never heard them before.

SIDE B
1. Everybody Needs Somebody
2. Sad And Blue