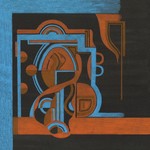 $65.00 In stock with supplier
ETA: 2-5 business days add to cart more by this artist

Orb
The Space Between (LP)

Australia's ORB return with their third album (following their Birth and Naturality albums on Castle Face).

Playing dark, sonically massive guitar-based rock that's heavy without sounding excessively metallic, ORB (not to be confused with the influential electronic group the Orb) hail from Geelong, Victoria, Australia. The group was founded by three members of the Australian band the Frowning Clouds after that band broke up: guitarist and lead singer Zak Olsen, guitarist and bassist Daff Gravolin, and drummer Jamie Harmer. The three musicians lived not far from one another, and with some extra time on their hands, they jammed regularly.

Inspired by their youthful enthusiasm for hard rock and early metal bands such as Black Sabbath and Blue Öyster Cult, they started writing tunes that drew tongue- in-cheek inspiration from doom rock, psychedelia, and hard rock. The longer they crafted heavy jams, the more they came to appreciate the style, and the less they approached the music with a smirk.

The Space Between is a progressive heavy metal album dripping in paranoia and escapism, but let's not over intellectualize, it's just riffs and drum rolls and the occasional synth. And it couldn't be better.

1. The Space Between The Planets
2. I Want What I Want
3. General Electric
4. Silverfern
5. Glitch In The Sky Matrix
6. Lucifers Lament
7. Stonefruit I,II,III