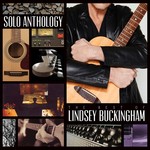 Solo Anthology - The Best of Lindsey Buckingham includes album, live and alternate versions of some of Lindsey's celebrated solo albums including cuts from Law and Order, Go Insane, Out of the Cradle, Under the Skin, Gift of Screws and Seeds We Sow and incorporates songs from his collaborative album with Christine McVie released in 2017. The anthology features Buckingham's film work with "Holiday Road" and "Dancin Across The USA" from the 1983 motion picture soundtrack to National Lampoon's Vacation, and "Time Bomb Town" from 1985's Back to the Future. Live versions of Fleetwood Mac's "Tusk" and "Go Your Own Way" round out the album, but the most thrilling tracks come in the form of two new songs that have never before been released, "Hunger" and "Ride This Road".

Lindsey Buckingham is widely considered one of the greatest guitarists and songwriters and musical expressionists of our time. A Rock and Roll Hall of Fame inductee and 3 time GRAMMY winner, Buckingham is best known as the producer, guitarist, vocalist and chief songwriter for Fleetwood Mac and as a widely celebrated solo artist. Solo Anthology - The Best of Lindsey Buckingham is a comprehensive record of this illustrious career.