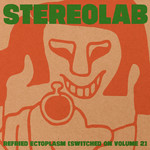 Remastered edition of a compilation of Stereolab singles and rarities, first issued in 1995. Initial copies come on clear vinyl.

Stereolab were an English-French avant-pop band from London, formed in 1990 by Tim Gane and Lætitia Sadier who both remained at the songwriting helm across many line-up changes.

"Across the '90s and '00s, there were few groups as exploratory, as productive, and as exciting to follow as Stereolab....Some have claimed Stereolab were detached, studious, overly intellectual. Listening to their music, though, and with the benefit of hindsight, nothing feels further from the truth: this music is alive, rich with melody, harmony and texture, gesturing towards genres and other artists in all their wild multiplicity. They may have been on indefinite hiatus since 2009, but these records will have a long, strong afterlife." - FACT