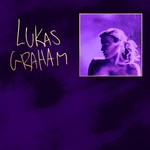 The breakout smash was the highest-selling single by a debut artist in 2016, and catapulted the Danish artist to sold-out tours around the world, critical acclaim from all corners.

'7 Years' turned Lukas' life into a whirlwind - a world away from his beginnings, born on a couch in Christiania, an impoverished, liberal, quasi-commune located in the centre of Copenhagen. While Lukas' roots to his home and community run deep, the singer is far from content with the accolades of the past few years: He's restless and ready to be known as an artist that supersedes any smash he may have, past or present. Now 30, engaged to his long-term girlfriend, and proud father of a little girl, Viola, Lukas is balancing the rigors of the road with family life and the attendant expectations. While the self-titled debut was dedicated in large part to Lukas' late father, '3' is for his daughter and sees Lukas push deeper still, holding a magnifying glass up to his life, laying bare his vulnerabilities and his fears, his sadness and his joy.