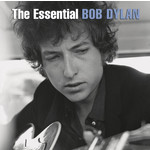 Double LP collection of 23 classics from the nobel prize singer / songwriter. Definitive, career-spanning and comprehensive, The Essential series features the biggest hits and best-loved songs from the most famous names in music history! An incredible value, each package features classic hits and signature songs by superstar artists.

This vinyl set by Bob Dylan includes 'Blowin' In The Wind,' 'The Times They Are A-Changin',' 'Maggie's Farm,' 'Like A Rolling Stone,' "Jokerman," "Lay Lady Lay" and more. Bob Dylan has been influential in popular music and culture for more than five decades.

Much of his most celebrated work dates from the 1960s when his songs chronicled social unrest, although Dylan repudiated suggestions from journalists that he was a spokesman for his generation. Nevertheless, early songs such as "Blowin' in the Wind" and "The Times They Are a-Changin'" became anthems for the American civil rights and anti-war movements.

Side A:
1 Blowin' In The Wind
2 Don't Think Twice, It's All Right
3 The Times They Are A-Changin'
4 It Ain't Me, Babe
5 Maggie's Farm
6 Mr. Tambourine Man
7 Subterranean Homesick Blues

Side C:
1 Forever Young
2 Tangled Up In Blue
3 Gotta Serve Somebody
4 Jokerman
5 Make You Feel My Love

Side D:
1 Things Have Changed
2 Mississippi
3 When The Deal Goes Down
4 Beyond Here Lies Nothing
5 Long And Wasted Years