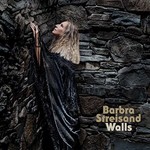 Walls is Barbra Streisand's first album since 2005 comprised mainly of original songs, and her first album ever to focus around a unified social theme. Walls finds Barbra exploring both her concerns and hopes for the future in a collection filled with beautiful melodies and thought-provoking lyrics. In addition to the three original tunes which the Oscar-winning songwriter contributed to, the songs on Walls explore topics near to the celebrated artist's heart. Streisand also brings a fresh perspective to the classic songs "Imagine" and "What A Wonderful World," and the Bacharach/David pop standard "What The World Needs Now." The penultimate song that Streisand sings is a timely one called "Take Care Of This House" by the legendary composer Leonard Bernstein and lyricist Alan Jay Lerner.

Over the course of her astonishing career, Streisand has recorded a number of songs that address the human condition. Recognized as one of the foremost interpreters of contemporary song, "Don't Lie To Me," and the other songs on Walls are sure to add to her enduring legacy as an award-winning singer and songwriter. In 1977, she became the first woman to win an Oscar for composing the music to the timeless standard "Evergreen" (Love Theme from A Star Is Born), which also went on to win the Grammy for Best Original Song and the Golden Globe. In addition, she has been duly recognized throughout her career for compositions on film projects emblematic of her songwriting gifts.

Down The Road Wherever